Facing an uncertain future of being able to remain safely in their home, John and Ruth found help and hope at a critical time 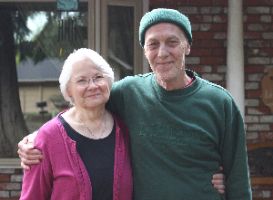 John and Ruth credit the Energy Conservation services they received from Community Action as the intervention that allowed them to remain in their home.

John and Ruth are a semi-retired couple living in Aloha. John retired six years ago at age 62 to provide full time care to an ailing parent. Since that time, he has relied on Social Security for his income while his wife Ruth works part time at a small, family-owned business. Living on a modest, fixed income has many challenges yet the couple find solace in having a warm, safe home to call their own.

In 2013, John and Ruth were facing a grave uncertainty – would they be able to continue to live in their home? Years of deferred maintenance and aging appliances were taking a toll on the couple’s health, safety and financial security. It was difficult to keep their home warm as it lacked insulation and vapor barriers. Heat also escaped through the single pane windows and drafted under the doors. The decades old furnace had fallen into disrepair and the high cost of electricity and gas was an expense John and Ruth could barely afford. All the while, the couple struggled to care for John’s elderly mother – striving to keep her warm and comfortable. When temperatures dipped, the household relied on infrared heaters and blankets, as the forced air alone couldn’t heat the home. John recalled “…with Mom being so sick, I was just deathly afraid [the furnace] was going to go out.” Providing their home with adequate heat was not affordable – but John and Ruth feared they would not find another house or apartment within their financial means.  “We were looking around,” remembered John, “and asking what would we do if we had to get out of here? [If] we would have lost this house…there is no place to step down to.”

Determined to find a way to remain in their home, John and Ruth reached out to Community Action. The couple hoped to find help to replace their furnace and were thrilled to welcome a Community Action Energy Auditor into their home to complete a comprehensive series of diagnostic tests. The audit revealed that with the right upgrades and repairs, the energy efficiency of their home could be greatly improved while at the same time significantly decreasing their energy costs.

Community Action’s Energy Conservation team replaced the furnace in John and Ruth’s home and much to their surprise, proceeded to work for the next 6 months on additional renovation and improvement projects. The team knew that while the new furnace provided a reliable heat source, the drafty home couldn’t contain the warmth. Insulation and vapor barriers were added throughout the walls and floors of the home. The single pane windows were replaced with energy efficient windows and new framing. John and Ruth received a new refrigerator, a much-needed ventilation fan in the kitchen and energy efficient light bulbs for every room.

John and Ruth’s home – and life – had been transformed. The cumulative effect of the renovations and energy upgrades resulted in dramatic reductions in the couple’s monthly expenses, giving John and Ruth a measure of financial security they hadn’t known in years. Most importantly, John and Ruth credit the Energy Conservation services they received from Community Action as the intervention that allowed them to remain in their home. “We wanted to stay in our house. And if that work hadn’t been done, I don’t know if we could have,” said John. “Being able to stay here and be in a stable home has been…awesome,” said Ruth. “I look forward to coming home every day.”

The ability to remain in their home gave the couple something priceless; optimism in the face of uncertainty. Said Ruth of the experience, “Having the hope was incredible. It came at such a critical time.”