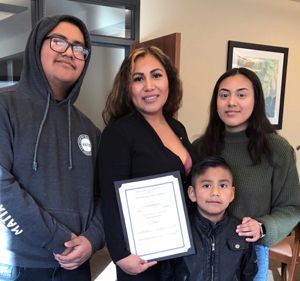 When Patricia recently lost her job and her apartment, she fell into a depression. She had been working as a server and bartender in a hotel restaurant. With six years of job stability and a steady income, she had been financially supporting herself and her three children.

But when hotel ownership changed, she lost her job and her world started crumbling around her. She could no longer afford her apartment and found herself alone with three children facing homelessness. She became anxious and depressed as she struggled to find stability. Fortunately, because of donors like you, Patricia was able to turn to Community Action and find the support she needed to get back on her feet. And she is thrilled to have found a new, more rewarding career path in health care.

At Community Action, Patricia worked closely with Family Advocate and Career Coach, Jazmin Castro. Jazmin encouraged Patricia to consider additional training to increase her earning potential. Patricia liked the idea of becoming a Certified Nursing Assistant (CNA) so she could work in health care and really help people. But she was afraid she couldn’t handle the training. English is her second language and she had very little schooling when growing up in Mexico. The idea of taking six weeks of classes in English to learn a new field was daunting. But because of your support, Jazmin was there to encourage her and help her along the way.

Jazmin helped her with her resume and recommended the Marquis Company’s CNA training program. With resume in hand, Patricia applied, interviewed, and was offered a spot in their training.

But she continued to face hurdles. She and her kids were living with friends, but she still had no income. How could she afford the gas she needed to travel to Newberg every day for the classes? How could she afford to buy the scrubs she needed? Because of donors like you, we were able to cover these expenses and provide other support like clothes for her children.

The classes were hard for Patricia and she struggled. But she reached out to Jazmin along the way and always received encouragement. Jazmin even let Patricia practice taking her blood pressure.

Throughout the six weeks of intense training, Patricia kept hearing these words from Jazmin, “I know you can do it.” These words kept her going, and she eventually proved them to be accurate. She successfully completed the training and is now a full-time employee at Marquis Assisted Living!

Thank you for believing in people like Patricia. Because of your support, she has a job that she loves and a new-found confidence. She sees this as a first step on a new career journey, “I want to keep learning and do more. Who knows? Maybe by the time I am 60, I’ll be a doctor!”

We provide critical services to low-income families in the areas of:

Your Support is Making a Difference

Meet the families that have experienced lifechanging support and regained stability thanks to donors like you.

Receive updates, hear inspiring stories, and see how your support is making a difference.